skip to main | skip to sidebar

I'll Have What Sidhe's Having!

And what Sidhe's having is enough to make any girl jealous!

To whet your appetite, here are some work in progress pics from Sidhe, with comments from Kev and Rachel.

The passionate, intricate writing of Rachel Robbins and the beautiful art of Kev Crossley fuse the best from our oldest stories with our deepest, most troubling modern fears, to take you on a journey unlike any you will have taken before...

Over to Rachel to begin:

"Confession: I used to play Barbies when I was a child. With my very tolerant little brother." 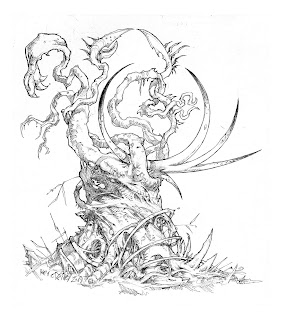 "But we made them our own, chopping their hair and using food coloring to paint funky/punky ’do’s, shaving their heads, and designing wardrobes out of broken jewelry and leather scraps --cut from thrift store purses-- which I superglued together." 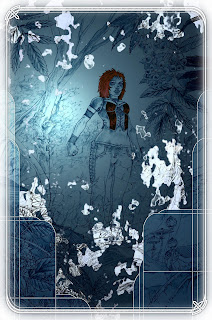 "Ken-boys wore hair extensions left over from the shaved Barbie heads, earrings, and sported ink-stamped tattoos of sharks and dragons. Everyone wore glittery nail polish as eyeshadow and magic markered fingernails. Josh and I took the clan outside; built them houses and caves out of rocks, moss, and dirt for shelters." 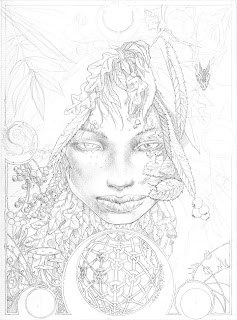 "They borrowed Star Wars model spaceships to get around on, and the occasional toy tractor. Some times we sat them on our cats' backs, which never made for happy felines but still provided a decent mode of transportation." 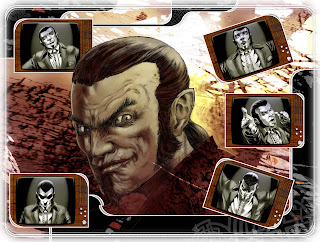 "Not ordinary Barbies, you see. These were Cyberbabes.

Cyberbarbies were nature worshippers, witches, and mediums...though we wouldn't have described them that way, that was the fact.

Cyberbarbies spoke to ghosts I sewed from lace scraps who had heads made out of painted eggshells. They had direct conversations with saints and God." 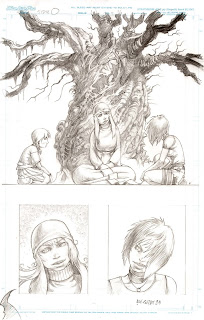 "Growing up resentfully Catholic, I felt the need to create a corrupt church against whom they fought: a parish who lived in cardboard Chiquita Banana box-- fully equipped with porcelain figures of nuns and priests, adorned with “prayer cards” on the walls. The head priest was a wind up Peter Pan toy who would spin in circles and fall over." 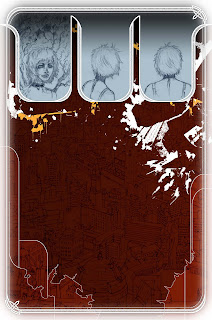 "Sometimes Cyberbarbies had to fight aliens, too, but that was just when my poor brother and I ran out of plot ideas. There was a lot of sex and every “episode” ended with a party or wedding. Pagan 11½ inch fashion figures with pose-able legs also spent much of their time hanging upside down from trees." 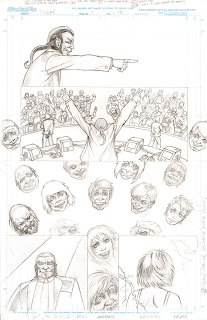 "This was, perhaps, the original incarnation of Sídhe.

Now I have Kev Crossley. We play Barbies, but on paper. Insomnia is our sandbox." 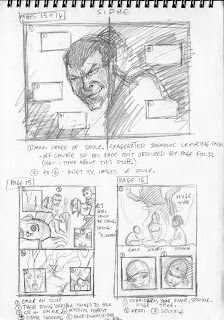 "And so the summer slunk away without telling anyone where it was going and Autumn has crawled over everything like a mould, heralding skeleton trees and greying drifts of leaves heaped, grieving." 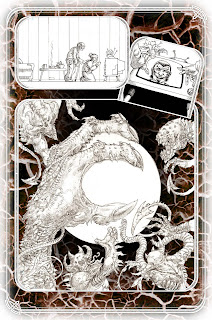 "The world of the Sidhe now inhabits my own. As the pages develop and the script unfolds from behind my eyes I'm increasingly finding the world Rachel has created to be invading every facet of my waking days. " 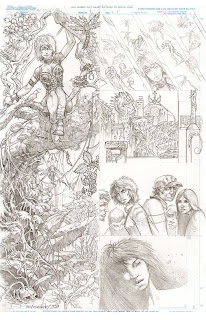 "The park down the road heaves with half seen creatures and the trees themselves stalk the edges of the grassed fields, looming above the people who play and walk there, seemingly blind to the scarecrow behemoths shaking and creaking in the tormented air. The streets and buildings are not free of this taint either. It's like seeing the world through a filter of the fantastic and macabre. 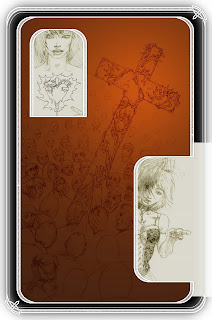 "This is the first time I've found myself so immersed in a story that I'm partly responsible for realising. I only hope the work I turn out benefits from this; I'd hate to be institutionalised for nothing!!!!!!"

Next week Kev will be at our stand at Thought Bubble with some of his gorgeous original art on show. You will also be able to see the magic take shape beneath his sorcerous pencil as he does some live sketching during the day.

If you want to see how the magic happens in this room: 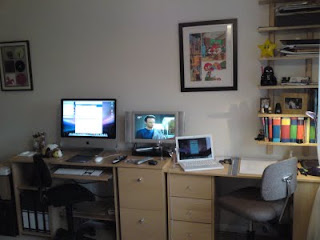 That starts with a script that turns into this: 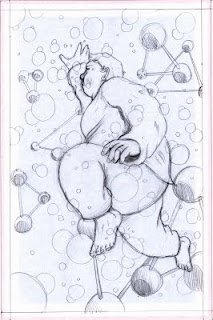 Which then turns into this: 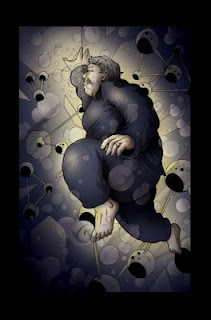 Head over to the Kronos City blog where Alex and Lauren will take you through it all step by step, and all the stage in between.

Alex and Lauren will also be Thought Bubble to talk about the book, the characters and show off the latest artwork.

Other goodies at Thought Bubble will be a limited number of Ashcan previews of Urban Legends by Leeds very own Steven Stone (who has just launched his new blog Written In Stone, check it out) and James Daniels which will be given free with purchases while stocks last.

We'll also be talking more about what we'll be doing in the PSN Digital Comics store, so come by a for chat.

There will be a limited number of posters of the Frank Quitely pin up from Burke and Hare available - these ones in colour and signed by the man himself. Frank is the guest of honour this year so you may be able to catch him around the show, or see him interviewed in a very special Geek Syndicate live chat on the Saturday night.

Two unique competitions will be running from the stand:

1) Win a chance to visit the Buskers Film Set.

Entry to the competition is free with any purchase, or £1 per ticket

The draw will be made on the 1st of December and the winner notified by email. Any winner under the age of 18 will need to be accompanied on the set visit by an adult.

The date and time of the visit will be arranged personally with the winner.

Thanks to Jeymes Samuel for making this possible.

2) Win a PSP 3000 loaded with Insomnia Comics. This competition is in association with The Geek Syndicate. Thanks to Sony for donating this great prize.

If you will not be attending the show you can still enter the competition by heading over to the Geek Syndicate Website.

To be in with a chance to win all you need to do is send an email to geeksyndicate@hotmail.co.uk. with the title “Going digital with Geek Syndicate, Insomnia and Sony!”

The first entry pulled out of the hat will win.

Unfortunately this competition is only open to entrants who are 18 or over and have a UK Postal address.

Hope to see you all soon
Posted by Insomnia at 16:14 You can reach us at:
redeye[@]
insomniapublications.com

Not the Red Eye you were looking for?

Where To Find Us

Insomnia Publications: Looking Out For Creators

Writers and artists welcome. Don't worry if you are a lone creator, we are happy to put teams together. Originality and quality will get you noticed. Your work should be unusual, literate and thought provoking.

For Writers
What is the story about
Detailed structural breakdown,
Characters profiles
Proposed length

Format is not important. We want your talent not your technical know how

For Artists (Pencils, inks, colours or all 3)
Are you a Penciller, inker, colourist, cover artist or letterer?
The length of story to which you feel you can commit.
Do you work in traditional media, digital, a mixture etc?

Note: the max size we can receive by email is 7Mb